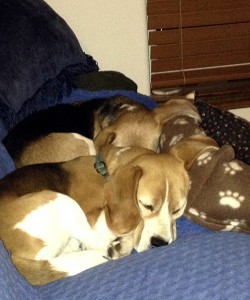 Yep, we had our big once-a-year local Variable Surface Tracking test on Sunday.  Beautiful weather, for sure–the best I’ve ever had for a test.  The best photos do not include me, because I wore a hat all day so no thanks, but the Beagle boyz are the important ones anyway!

Connery was track five of six and Dart was track six, so we watched the first tracks and then waited for Connery’s turn in the quiet of a parking lot distant from the test “home base.” The tracks are laid all over a large campus.

After the tracks are run, the handlers and the club and the tracklayers meet up at the “home base” parking for a tailgate lunch.  We all talk about what went wrong and right and say nice things about each other’s dogs, talk about other tracks we’ve run and what we plan in the future.  Fun, right?

However, neither of the boys passed.  None of us did!  It’s okay.  This test has a 6% pass rate and on this particular day, most of the dogs didn’t get very far.

Connery was one of those.  He had a very difficult start (an obedience class had lingered extensively on top of his starting yardage).  He had a good idea where the track went and pondered it hard, but in the end was too concerned about the circumstances; he turned away to an area he hoped would be correct.  Oops!  But we finished the track with the tracklayer and wow–once he got back on the track, he never missed a step.  It was an amazing job, and I was so proud of him!  Good boy! 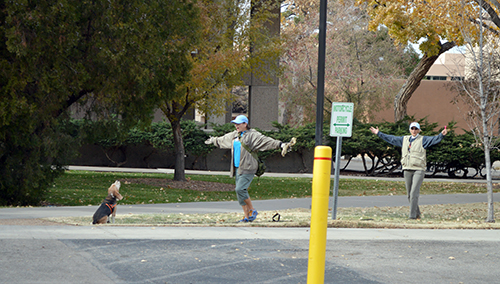 Connery indicates the final article of his test and we celebrate! 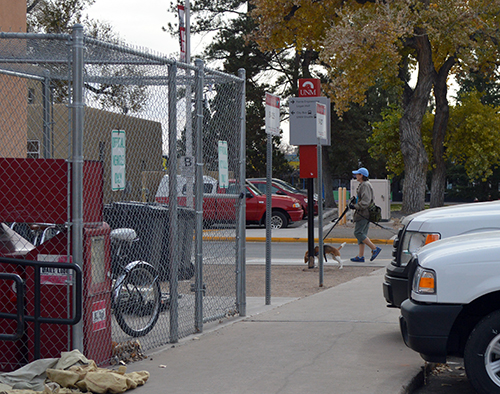 Dart and I on the way to his start line–yes, he’s lunging against the line right at the moment, but photo ops weren’t rife with this track so there you are….

Dart’s starting yardage went through two giant transformers at the corner of a building after winding through trees.  Note!  If you’re ever running–or writing about running!–from tracking dogs and you want to muddle the scent, try this.  The scent whirls around and pools in the craziest ways.  Boy does it!

But! Dart pushed through it to…

A grassy area full of ACORNS.

We circled and circled and-and-AND finally got out of them and there were BERRIES!  OMG BERRIES!

(…I invite you to picture the thought balloon over my head…)

So we circled and circled and I could tell Dart knew the track was there, but just couldn’t overcome the NOM NOM NOM.  Eventually I out-persisted him and we dashed across a busy street during a clear moment where I have never been so glad to see an article!  Yay!!  We got back on track for a while and then…

We spilled out in the middle of the busiest area of the campus, all hard surface.  (In fact, the same area we tracked in my Best Laid Plans blog!)

Dart was already obviously tired from the Ordeal of the Nuts and Berries.  We muddled along, making good progress but eventually shifting parallel to the track (which I know now, but didn’t then).  The next corner turned away from us, which we’d made terribly difficult by being parallel off the other side.  As Dart was hunting it, a loud skateboard went past with the rider being pulled by an interested-in-the-small-dog husky and the owner shouting “LEAVE IT, LEAVE IT!”

Dart looked hard after that but as a team we were fried and just couldn’t sort it out.

But, OH!  We were SO close to the end…  And I am very, very pleased with him for persisting through the Nuts and Berries, the terribly loud and busy surrounds, and the natural difficulties of a hard track.  Good dog! 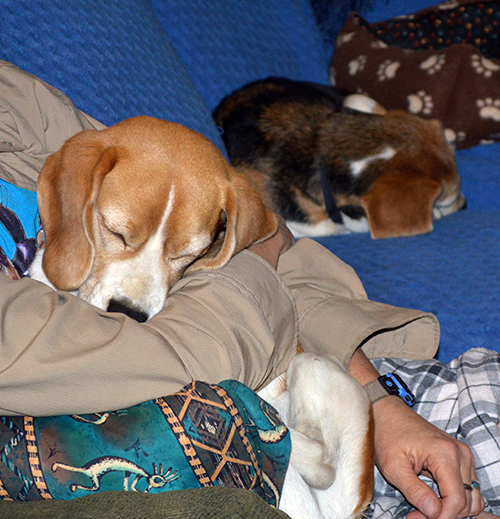 Weirdly, it was after all this that things got truly difficult.  (I know, right?)

After Dart’s track I returned to the parking lot where I’d been dropped off.  Bummer, no one there!  Turns out the other of us had been told to I would finish up near main base.  But no one told me,  and the track didn’t actually end near home base, and I didn’t have a phone because I was stripped down (so to speak!) for tracking.  Awesome, right? Fortunately someone else there did, a spectating friend who was on his way home.

That actually wouldn’t have been that big a deal, except that when we got back to main base, it was…

Yes.  Everyone had left.  Eventually the spectating friend recalled a vague mention of a not-very-nearby restaurant instead of the tailgate lunch.  Attempted phone contact was unsuccessful.

And strangely, while I was utterly delighted with Connery’s failed track and very proud of what Dart and I had worked through, this situation came as a fierce blow.  The circumstances hadn’t been deliberate, of course, but the experience of it from here?  “You failed, your ride has been directed to the other end of campus, we’re all gone…have fun with that!”

We eventually decided to try the restaurant so I could get the track maps (which are supposed to be presented at the end of the event).  I ran in, grabbed them, and fled.

The thing is, I hurt.  I just can’t fathom being left out in this way. And yet…I’m really sensitive to this kind of hurt, and I know this about myself.

I don’t actually have any wise conclusions, nor have I yet come to grips with this particular lesson.  Really, I’m just in search of answers.  Trying to honor what I feel but not entirely sure what I ought to be feeling in the first place.  And trying to hold onto the pride I had in the boys and the work we did today, because that should be the most important thing, right?

*insert wise conclusion in this space*

*seriously.  right here in this space.*