The Variable Surface Tracking test is in two weeks,* and we’ve been training at the campus.  It’s a difficult location–tons of activity even on the best of days, far too many (illegally) loose dogs, rife with bits of trash and litter and dare I say body fluids.

*I had never intended to take Connery this far in training or testing as his sinuses have been so undependable, but he made it clear to me that he prefers Tracking to Not Tracking, and so here we are.  Because plans mutate.

This weekend was our last practice track.  Plenty of gusting wind to make things interesting, but an otherwise  nice day: low fifties in the sun. 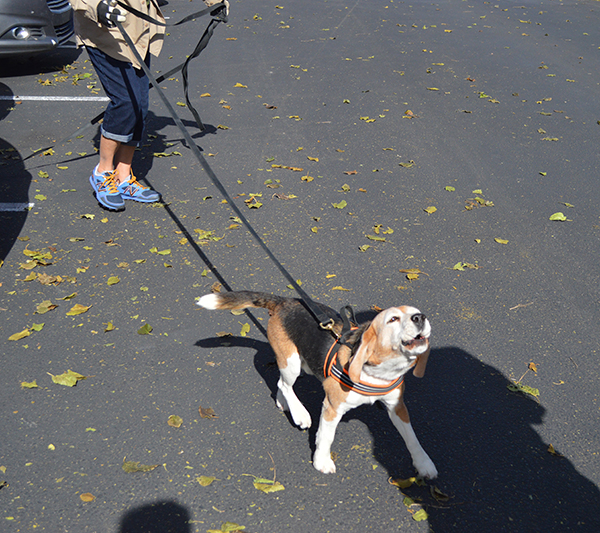 THE PLAN: Friend lays two tracks around 7am: full VST length, plenty of hard surface work.  Dogs run their tracks starting around 10am–lots of praise along the way.

REALITY:  A lot can happen to a campus between 7 and 10am.

We arrived to a crammed parking lot. We found Friend’s car, but no Friend.  Eventually she and Friend Two arrived from an interrupted walk, both looking a little dazed.

Me: What on earth is going on here?

Friend: Well…some sort of big musical event.  Also the Special Olympics.  Also Popejoy is presenting How The Grinch Stole Christmas.  By the way, one of your tracks runs right across the entrance to Popejoy.  Who knew?

In moments like this, one says simply, “We’ll do the best we can to create a good training experience.”

Of course, if we’d realized that the first showing of the Grinch was at 11am, we probably wouldn’t have started running the track at 10:30.

There was no available parking anywhere near the start flag, so Dog Dad nipped the van in against the curb corner in heavy traffic while I grabbed all my gear, tossed it to Friend, and then pulled Dart from his crate.  We fled to a safe distance, dripping gear all the way.

There we took a breath, sorted and untangled things, and got started.  Dart proved himself to be distractable (the road noise was profound), but he quickly took us to the first challenge–crossing the (normally quiet, now engorged) street.

Already we were giggling with an edge of hysteria.  Absurdity will do that.

We waited for a break and crossed the street at speed, without attempting to actually track. Dart picked up the scent beautifully on the other side, and on we went.

To Popejoy.  And the Grinch. And the sudden surrounding throngs of people rushing in and out of the auditorium, directly in front of our track.  Did I say throngs?  I meant sea.  SEA of people.  No, wait.  TSUNAMI of people.

Well, we made it through.  Sort of.  Leaving event-dressed children wide-eyed and pointing while I told Dart, “Good tracking!” to convince us both.   And beyond that there was…

Food.  Food everywhere.  BIG CHUNKS OF NOM NOM NOM.  Beside the track.  On the track.  OM NOM NOM! Surrounding the small dog of No Impulse Control.

Note to self: check with judges about allowable handling.  We’re specifically not permitted to guide the dog so must be very careful this, but trash food is a safety issue.

Dart finally got past the worst of it and turned to the next short leg onto asphalt.  There, as it happens, we discovered the Zone of Crushed Peanut Shells.  Which were right beside a hard surface turn.

A turn, if you’re not familiar, is something a dog often handles by circling to pin down the new scent direction.  So Dart’s progress went something like:

*circles to find the turn*

Well, that took a while.  But he did get past it and he did track on to the glove, and he was indeed pleased with himself.  And because of the way we handled the ridiculous circumstances, these moments will serve Dart well in the future–not scary, but invigorating, and not something that stops the work.  Yay!

Of course, then we walked the long way back to the base of operations where Connery’s track started, and discovered that for some inexplicable reason…

The sprinklers were on.  In the exact section that held Connery’s first leg, a turn, and most of his second leg.

And one of the sprinklers was missing its head, turning it into a burbling 15′ fountain at the center of a cute little newly formed pond.

As it turned out, the track couldn’t have been more precisely placed along that whole line of sprinklers even if Friend had gotten a map and searched the things out.

Usually the sprinklers only run for twenty minutes-ish, so we waited for thirty and then steeled ourselves to deal with it.  Low fifties in the sun is pleasant enough…if you’re not going through sprinklers.

We went through sprinklers.

Connery thought it a really bad idea.  But he carried on. And we, not being insane, skipped around the utterly flooded part and then ducked back through lighter sprinklers to let him pick up the track.

After that, the busy day presented him only with a chatting pedestrian who wanted to discuss dogs and a rude, charging dog on an extended Flexi[spit!] just as Connery was finding his Moment of Truth asphalt turn.

He was about to quit, then–he’s far too concerned about being attacked to take such things in stride–but I gave him some time and he was able to go on.

So in the end he learned that craziness does not mean stopping.  Not the same lesson he would have learned if we hadn’t adjusted around the ridiculous.

And la!  Everyone got cookies!  (Well, everyone who happened to be a dog.)  And everyone got happies!  And we’re still laughing. Because, seriously.  The Special Olympics, the Grinch, the musicians, AND the sprinklers?

I just hope the universe got such things out of its system before the big test day.

(We are not, it must be said, known for Good Tracking Luck.  But that’s another story.)

And all that is why I felt compelled to write about Plans Best Laid (please tell me someone got that pun) instead of the treadmill journey.