With a title like that, you might be tempted to think I’m talking about the international editions of my books, or the cool covers that sometimes result when the book comes out in a different country.  But no.  Because when my life isn’t all about writing, it’s all about training the dogs.

Yup, it’s time for another Dog Agility Blog Event.  (One of the perks of participation is totally selfish–it spurs me to read all the other blogs, and to look at the subject a whole new way.  Check ’em out!)  This month we’re pondering the internationalization of the sport, a matter which brought some puzzlement in behind-the-scenes discussion.  “I’ll never compete internationally, so…?”

I am pretty darned sure I won’t ever compete internationally, either.  Never mind being good enough…I don’t fly!  Boom.  Grounded.

But I have a very strong belief in the strength of options.  Options when it comes to training techniques, training tools, training theory.  In fact, I feel strongly enough about having options that even when I run across a technique that makes me wrinkle my nose, I check it out.  You never know when some little piece of information will crop up as useful later on–another dog, another situation, another task. 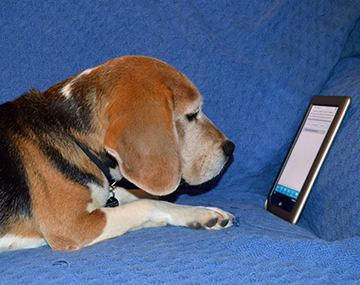 Just TELL me what to do. Really. Then we'll all be happy.

Once upon a time (she says, by way of illustration), I was new to the idea of shaping behaviors.  Not to mention I had a young dog (ConneryBeagle) who didn’t like shaping behaviors.  Connery wants you to define exactly what you’re asking of him.  Do this; don’t do this.  He doesn’t like being asked to suggest things.  Furthermore, if he thinks his way is valid, he will suggest the same thing over and over and over and over and…look at you in disgust and quit.  Whereas if he does suggest an alternative to a previously defined behavior and you say, “Nope, do it this way,” he will then happily do it that way.

Our experimenting with shaping behaviors was very short lived.  Now that Connery is much more seasoned, I can give him broad hints about what I’d like him to do and then clicker reward, but that’s really a different thing, and I fade the clicker as soon as I can.  But at the time, I read up on it, learned about it…watched other people doing it, and tucked it away.

Fast forward a number of years, and along comes adolescent Dart Beagle–who has flunked being a show dog because he forgot to descend both testicles (this doesn’t surprise me; he’s inordinately fond of them), and who couldn’t be placed in a pet home because he vibrates with intensity.

(The number of people to use the word “vibrate” to describe him, completely independent of one another, is no coincidence.)

So lo, Dart came to my house where I love him fiercely and am willing to be humbled by his antics in agility.  And obedience.  And tracking.  And where in spite of all that, he’s also taken on the mantle of service dog.  (That’s another blog.)

On the other hand, Dart does not love the flash on this particular camera...thus the squint. But he does love the bucket, which--with shaping--he not only learned to balance on in a single session, he also realized that in order to balance on it, he'd have to flip it back upright when he knocked it over.

Dart looooves shaping.  Dart loooves figuring stuff out.  He loooooves knowing he’s clever and proving it.  And Dart LOVES the clicker.  Dart loves the clicker SO MUCH that I use it as a reward during times when he seems stressy.

The point being, if I hadn’t explored both shaping and clicker use just because it wasn’t right for my dog at the time, I wouldn’t have had the option to grab those tools when Dart came along.

So no, I’m not going to compete internationally.  And I don’t particularly like what I’ve seen–safety-wise, fairness-to-the-dog-wise–on some sample AKC Masters C courses (although I also saw one that looked like challenging fun).

But I’ve been watching videos on some of the international techniques, and I’ve watched the videos of world competition, and if some of what I see makes me think “what the effing F is the point of THAT?” it doesn’t mean I won’t look into it, see what proponents of such maneuvers are saying, and see where such handling is supposed to be optimally useful.

Because you never know.  One day it might be the perfect tool to help one of my dogs understand whatever lesson we’re trying to learn on that day.

My books are SF/F, mystery, paranormal romance, and romantic suspense. My dogs are Beagles, my home is the Southwest, and the horse wants a cookie!
View all posts by Doranna →
This entry was posted in ConneryBeagle, D'Artagnan Beagle, Dog Agility Blog Event and tagged agility, ConneryBeagle, Dart Beagle, dogs. Bookmark the permalink.

5 Responses to Internationally Yours