My friend Julie Czerneda tagged me for this blog meme–she’s already done hers, and you can find it at that link.

1. What is the working title of your next book? 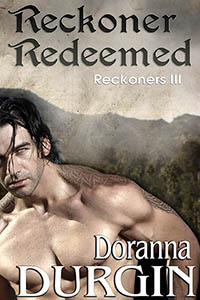 Am I supposed to have a single answer for this?  I’m working on the backlist production of the Changespell Saga–that’s what’ll hit the “shelves” first.  And I’m preparing to write LYNX REVEALED, the next Nocturne Sentinels title.  And TAMING THE DEMON is the next frontlist title to hit the shelves (another Nocturne, in the new Demon Blade series).

But my big new exciting thing at the moment is the original (and probably author-released) third book in the Reckoners series, RECKONER REDEEMED.  I’m trying to decide whether to do a Kickstarter for it (which will have a huge effect on its length)–but I need a certain amount of material on hand before I make the decision, and that’s what I’m working on now.

(You see?  I already made the cover for it.  Because that’s the way my muse works.)

2. Where did the idea come from for the book?

The Reckoner Series was an idea I kicked around for several years.  I wanted a little bit Buffy, a little bit Scooby Doo, a little bit Ghostbusters (Garrie, our reckoner), and a whole lotta Trevarr (our hero).  Heh heh heh.  Sklayne built himself from whole cloth, and knew who he was the moment I started typing his first scene, so I’m not sure I can take credit for him.

I was targeting paranormal romance–since that’s where I’m active right now with the Nocturnes–but I really saw this as a chance to shift a little close to my fantasy genre roots.

So I wrote STORM not knowing if Tor would pick up #3, and I wrote it true to the outline/proposal…and that story definitely needs to be finished.  For all of us!  I also have the rights back to THE RECKONERS, so will be putting out an author cut of that one.  (To meet production needs, I had to cut about 30K words from that book, and I think it’ll benefit if it gets some of them back.)  STORM OF RECKONING is still available, however.

3. What genre does your book fall under?

Paranormal romance, with a robust cast of characters and the evidence of my fantasy genre roots.

4. What actors would you choose to play the part of your characters in a movie rendition?

5. What is the one-sentence synopsis of your book?

6. Will your book be self-published or represented by an agency?

I’m not entirely sure yet.  That is, the first two books were repped and published by Tor Paranormal Romance.  This third book may go out under my Blue Hound Visions imprint, or it may go through The Knight Agency digital assistance program.  It won’t be a publisher book, however.  This is for me and Reckoners readers, and for my muse.  I promised her we would do this.

7. How long did it take you to write the first draft of the manuscript?

Dunno yet!  It’ll be written as I can buy time for it (one reason I’m considering the Kickstarter), and will probably grab moments between the scheduled Nocturnes.  It should be about 4 months total, when all is said and done.  Depends on the length, too, which depends on whether I do the Kickstarter thing…

8. What other books would you compare this story to within your genre?

Sometimes I think readers are best positioned to answer that question.  So if anyone has a clue–based on the first two books–I’m  all ears (eyes).  It’s a book with dry humor, a lot of attitude, and a lot of sly heart.

9. Who or what inspired you to write this book?

10. What else about the book might pique the reader’s interest?

It is, as are all my books, about people coping with change and emotion–about learning who they are, by how they deal with what happens in their lives.  This means I get to make things happen in their lives, oh yes I do.

In this case, there are a number of elements I haven’t played with before.  Trevarr’s world is pretty dark, and that was fun to play with–while giving him a lot to learn about Garrie’s world.  Sklayne was the most fun, I think–both powerful and naive, shackled and uncontrollable.  I love him to pieces.  8)

Thanks, Julie, for the chance to play with this blog meme!  And what do you guys think?  Kickstarter yes?  Kickstarter no?  Just shut up and write?

4 Responses to “The Next Big Thing”